Choosing the right mixer can solve a lot of problems

There are more than 50,000 municipal water systems in the United States and most of these systems rely on water towers, above-ground, and below-ground tanks to store their treated potable water.  Many operators rely on mixing via normal cycling of water in and out of the tank to limit water age and deterioration of disinfectant chemicals.

This reliance on “passive mixing” is not enough in most cases to prevent thermal stratification, which can lead to a drop in residual chlorine and a resultant growth of bacteria.

When bacteria contamination occurs in a tank, a common response is to set the tank for deep drawdown and in extreme cases, completely drain, flush, and refill the tank.  Not only is this strategy a big waste of water resources, it also raises cost for labor and chemicals.

When continuous mechanical mixing is combined with frequent sampling & periodic chlorine boosting (when needed), water quality is maintained and less disinfectant is required.   This paper will address GridBee® & SolarBee® active mixing technologies developed to completely mix potable water storage tanks up to 100 million gallons or more while virtually eliminating thermal stratification, sampling inconsistencies, and other tank water quality issues.  These technologies have the additional benefits of reduced labor and chemical expenditures as well as providing a means for EPA regulatory compliance.

Thermal stratification promotes deterioration of water quality especially in the upper part of the tank. When water warms and stratifies, newly treated cold water coming into the tank will not mix with the existing water and tends to stay near the bottom. This cold bottom water is also the first to exit the tank creating a usage "short-circuit” leaving the bulk of the warmer top water unmixed and unused. (See Figure 1 below.)  Thermal stratification can start to occur with temperature gradients as small as 0.1°C. If stratification persists, the chlorine residual may decline in the warmer unmixed volume allowing bacterial growth and an overall decrease in water quality.  Stratification also introduces sampling inconsistencies that can lead to over- or under- boosting of chemical disinfectant. Since water quality testing is based on sampling from pre-selected locations within a tank, it is possible water quality testing may not reflect the real health of the entire water volume especially in a stratified condition.

However, a fully and consistently mixed storage system provides a reliable means for true testing of water quality parameters including temperature and residual disinfectant from any sample point.

In water systems with natural organic matter (NOM) content, chlorine added at the treatment facility can react with NOM to form a disinfection byproduct (DBP) called trihalomethane (THM).  THM formation is a concern for many water systems due to of potential health risks over time.  The THM compliance limit is currently 80 ppb (locational running annual average) but this may be lowered at some point in the future.

Unmixed tanks with old, stratified water will tend to have high levels of THM in the upper, warmer part of the tank.  Good floor to surface mixing homogenizes the water into a lower THM "blend" as existing, high THM water is mixed with the new, lower THM water.  The well mixed, lower THM blend can then pass out of the tank under the compliance limit and as the average water age declines with mixing, new formation of THM in the tank is further minimized.

About 30% of US water systems have switched from chlorine to chloramines to reduce THMs.  Active mixing is beneficial with both types of disinfectants; however, good mixing is especially important in chloraminated systems.

If chloraminated water is allowed to stratify and age too long due to poor mixing, ammonia oxidizing bacteria (AOB) may convert free ammonia to nitrites.  The American Water Works Association (AWWA) has noted nearly two-thirds or more of tanks with chloraminated water experience unwanted nitrification and a loss of residual disinfectant, especially when water temperatures rise during warm weather.  When the temperature of chloraminated water rises above 15°C (59°F), rapid AOB growth (which are 13 times more resistant to chlorine than most bacteria) can occur particularly on the floor and walls of the tank.  To avoid this scenario, it is critical for the mixer to circulate completely along the walls and clear down to the bottom of the tank to maximize AOB exposure to available disinfectant.

While active mixing can provide consistent disinfectant residual, eliminate thermal stratification, and ensure that all of the water in the tank is of a uniform age, water quality still needs be monitored on a regular basis to ensure that it meets requirements.  Since active mixing provides a much higher confidence and trust in test sample results, both over-chlorination (higher costs) and under-chlorination (higher risk) can be avoided when disinfectant boosting is needed.

There are a variety of mixing technologies for potable water storage tanks.

This practice relies on the inflow of new water to mix with the older water. The effectiveness of this method is dependent on the inlet/outlet location and the rate of water usage. When water usage rates are moderate to low, passive mixing is often not effective in preventing thermal stratification.  Also, if the tank needs a chlorine boost, passive mixing offers no help to mix the new chlorine throughout the tank.  Passive mixing is not a viable mixing solution.

These types of mechanical mixers utilize an impeller turning at high rpm to create turbulence in the water and promote mixing in much the same way that a handheld cake mixer does. While these mixers do blend the water in the vicinity of the impeller, the energetic turbulence that is generated prevents the water from either traveling out too far from the mixer or being drawn in from any significant distance.  (See Figure 2 below.) They usually deploy multiple feet above the floor which creates an inconsistent 2-3 foot thick dead-zone over the floor.  This dead zone opens the door for flow short-circuiting problems where the last water into the tank is the first water out of the tank.

The nature of the “propeller” design has other issues as well.  These types of designs are prone to bearing failure over time due to the overhung load.  Even further, there is also the possibility of “floor-walking” or tipping for tri-pod systems unless firmly secured.  Fixed systems may alleviate the “walking” and tipping, but they require a diver for installation and service.

SolarBee® active mixers were originally developed for solving water quality problems in lakes and raw water reservoirs where they have a proven ability to efficiently circulate water long distances up to 35 surface acres or more.  SolarBee® also pioneered the modern-day potable tank mixing market in 2004.

Instead of creating turbulence, the SolarBee® utilizes near laminar, high volume flow to provide complete bottom to top, side to side mixing.  SolarBee® equipment require very little power due to its minimal lift (head), up-flow pump design. The low-power consumption, high-flow output allows the SolarBee to be powered completely by solar energy with a deep-cycle battery backup to allow 24/7 operation.  The SolarBee is a self-adjusting floating mixer with its intake about an inch above the tank floor.  This creates a full bottom to top mix giving your tank all the advantages of effective circulation.

Utilizing all the knowledge and experience of SolarBee® high-efficiency mixing, the GridBee® GS Series is a compact, submersible electric mixer utilizing effective sheet flow to create large induced flow patterns within the tank.  The impeller and motor are housed in the GridBee “shell” eliminating any “walking” potential while also adding a big degree of convenience, safety, and bearing life that open propeller designs discussed earlier can’t offer. Deployment is simple and can be performed while the tank is full and in service.  The GridBee® GS rests on the tank floor to ensure a complete and consistent floor to surface mix.  The GridBee® GS was also designed for diverse deployment and can be suspended off the floor within the water column should it be required (in cases where there is a buildup of manganese in the tank for example). 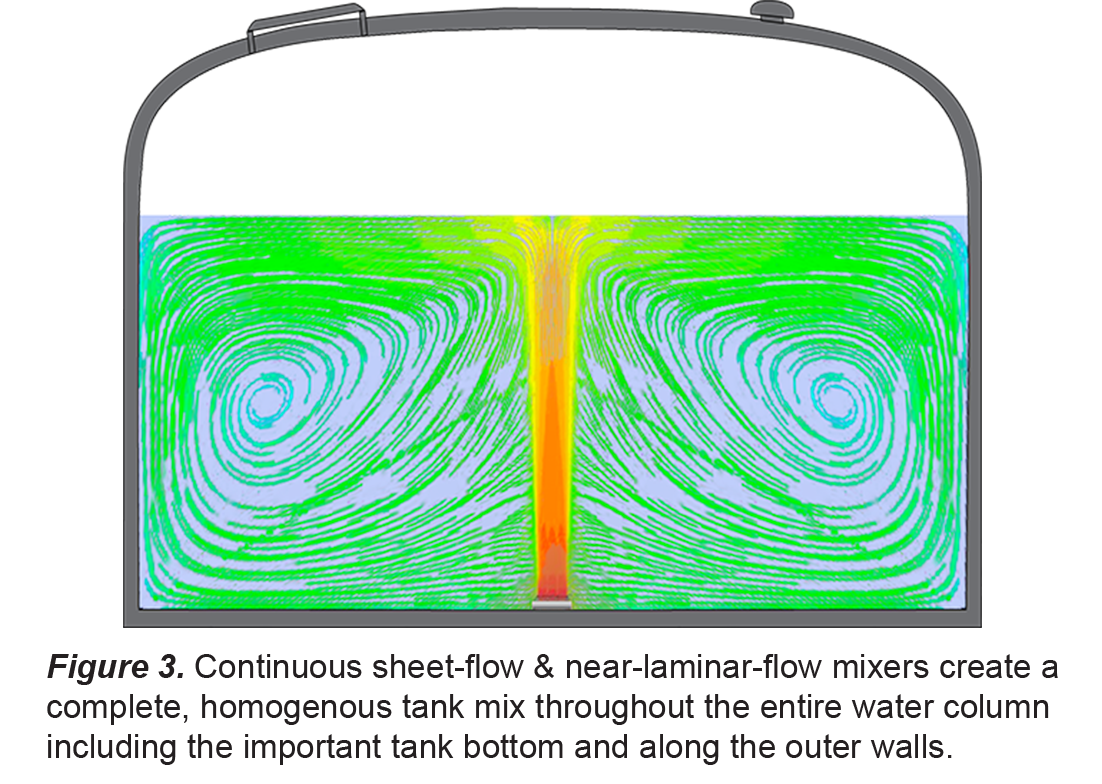 Inadequate mixing in potable water storage tanks is a persistent problem for many municipal water systems.  Simply put, tanks need consistent, effective, and reliable mixing.  Test sample inconsistencies, thermal stratification, inconsistent water age, low disinfectant, and other DBP issues can all be mitigated with complete top to bottom tank mixing.  Medora Corporation GridBee® and SolarBee® potable mixing technologies are a “best on the market” mixing solution for potable water storage tanks of all shapes and sizes (up to 100 million gallons or more!) bolstered by unmatched life cycle support of its Customers and equipment.