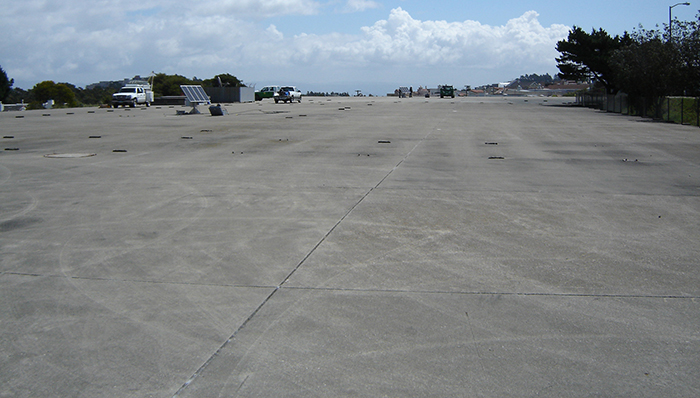 Because we already are.

Mixing and THM Removal in these super-sized tanks are based upon the same premise as any smaller size tank just scaled up to meet the needs of the tank no matter the size.  Check out our Case Studies on this page or contact us to discuss more how we can help maintain the best water quality in your mega reservoirs!

This reservoir is an enclosed water storage facility for potable chloraminated water, and is the largest reservoir in their system. Surface area is 11.0 surface acres and maximum depth is 30 feet when full; operating volume is 90 million gallons. There are 1000 roof support columns in the reservoir. The system converted to chloramines in February 2004 and had a history of stratification problems, short-circuiting, high water age, and dead zones that lead to high nitrification potential.  Primary goal was to provide complete mixing in order to reduce water age and prevent nitrification.

Medora Corporation (SolarBee®) pioneered the potable storage tank mixing market in 2002.  This is the first independent study of Solarbee® potable mixing technology as well as our first "mega reservoir" at 90 MG (reference Medora Corporation Case Study above).  Since then, Medora Corporation, GridBee® SolarBee® equipment have been solving water quality problems in water systems across the United States and the world.

"Planning for the Solarbee Mixer evaluation included the selection of a SFPUC reservoir to accommodate testing. Sunset South Reservoir, the largest of the ten city reservoirs, was selected because its size and features could accommodate installation and monitoring. While this basin was not identified as having a high potential for nitrification, there was a consensus that if the mixer was effective at the largest SFPUC reservoir, it would likely prove to be effective at many of the other comparable or smaller sized SFPUC reservoirs with similar aspect ratios (relative dimensions)."  Read the full report here.

The original installation was in one (1)  of thirty (30) underground potable water storage tanks used by this Customer.  This particular tank is a 24.5 MG underground reservoir that is divided in half internally by a barrier. Total dimensions of the reservoir are 3 acres in area and about 25 ft deep.  They needed a thorough mix to eliminate thermal stratification, short-circuiting stagnant water conditions, and to provide a uniform 2 to 3-day water age. The Customer tried some submersible high HP large banana-blade mixers and found them to have serious problems including major failures, extensive maintenance requirements associated with corrosion.

Comparing Medora Corporation, GridBee® SolarBee® performance results to the other types of equipment tried in the past, this Customer is in the process of adding GridBee® SolarBee® to all their potable water storage tanks as well as... Read More

This is a large potable water storage system in the Middle East with eight 30 MG above-ground concrete tanks.  Due to temperatures averaging between 38° C (100° F) and 43° C (110° F) from mid-May through mid-September, the water in these tanks suffered from extremely stratification.  As a result, the water age and disinfectant residuals were inconsistent throughout the tank volumes.

Two (2) GF10000PW mixers were placed in each of eight ground storage tanks, for a total of sixteen (16) mixers.

Almost immediately after turning the GridBee mixers on, temperatures converged to within 1° C... Read More