The following is an interview with Devon Smith, PE of Underwood Engineers, a civil environmental consulting firm.

this interview in pdf format!


Can you give us a quick overview how the project started, and the organizations involved?

When we started up the Southern New Hampshire Regional Water project, evidence indicated nitrification was occuring in the system.

A task force was formed that included the State, Underwood Engineers, PHD’s and professors from University of New Hampshire, the Town of Derry and key water system operators and other consulting firms. We workshopped together how we wanted to address the nitrification situation.

Jim Malley of UNH found a case in New England that was similar to our problem. A water district had built a tremendous amount of water tanks to add fire suppression and as a result had too much storage which had an adverse impact on water quality. They found that by adding chlorine to storage tanks they could help mitigate nitrification by satisfying nitrite’s chlorine demand and also re-form monochloramine with any excess free ammonia. During a significant nitrification event the monochloramine can deplete quickly leaving just free ammonia again which can cause the problem to cascade. Through their work they founded the “do no harm approach” where only chlorine is added versus chlorine and ammonia.


Why did you choose Ixom’s ResidualHQ over similar systems from competitors?

I gave a presentation on nitrification for New Hampshire Water Works and afterward I was approached by Carlsen Systems, the Manufacturers’ Representative for Ixom Watercare in the region. Your team was the only one willing to do the no harm approach and innovate to meet our design intent. You guys were very on the ball, worked with us, gave us information and that eventually led us to this pilot with the ResidualHQ and Ixom Watercare.

Tank mixing is a major factor. If you put a small chlorine feed into a 4 MG tank, it’s not the chemical reaction time that governs even distribution of chemical, it’s the mixing. I’ve had experience with your mixers and I think they work great.

Also, the ResidualHQ is very well developed: it has a lot of safety features and protocols built into it. This isn’t a beta – it’s been through its paces and it’s a robust system. I like that it’s contained on a skid, and it’s easy to access everything you need. 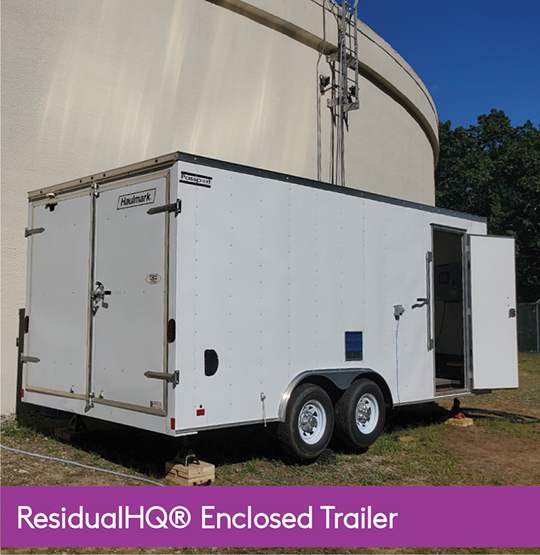 What were the key performance indicators (KPIs) that you tracked?

We tracked free ammonia, monochloramine, and nitrite. Prior to using the ResidualHQ, monochloramine was breaking down more quickly than expected, leading to elevated free ammonia levels which can provide the potential for nitrification. The main KPI of the ResidualHQ’s success was its ability to knock down the free ammonia levels in the tank by more than half. At those low ammonia levels, nitrification did not occur in the tank as it had the year prior. When your tank has good water quality, it’s generally representative of the system’s water quality as a whole.

In 2020, the tank nitrified, and the nitrification was widespread in the system. Fortunately, no drinking water standards were violated during the event thanks to tremendous sampling and flushing efforts performed by the operators. In 2021 after the installation of the ResidualHQ, the tank did not nitrify, and the vast majority of the system did not nitrify. There was some evidence of nitrification towards the outskirts of the system, which was much more manageable than the year prior. The overall severity of nitrification was night and day. Typical operator response for handling nitrification became much more effective since the tank’s water quality was so good. 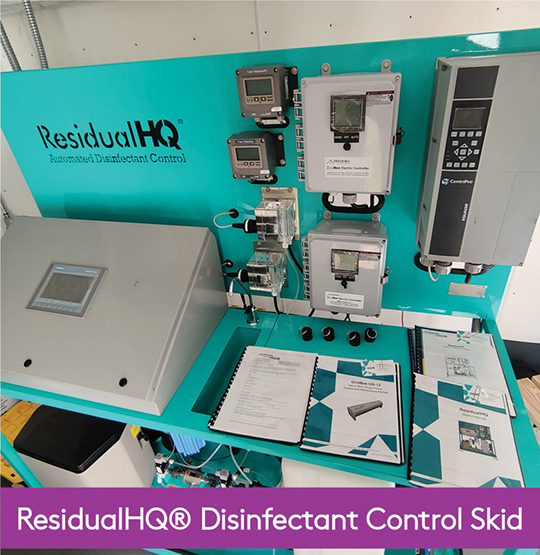 How were system operators handling nitrification before?

This distribution system doesn’t have any redundant storage, so they were unable to drain their tank and still maintain system pressure, so flushing was their only tool. Flushing wasn’t cutting it, so they needed some stronger tools to prevent and combat nitrification. It was becoming extremely labor-intensive to respond to nitrification because it requires a significant amount of monitoring, water quality testing, and flushing. After installing the ResidualHQ, the operators were very grateful for the time savings and increased productivity.


Do you have any additional feedback for Ixom Watercare?

Keep doing what you’re doing! I think you guys are pioneers. It seems like your business model was built on problem-solving and adapting. The fact that you offered Derry your equipment as a pilot speaks a lot to your ethics. Your willingness to modify your “off the shelf” product during the pilot shows your ingenuity. It was great working with you guys: I don’t think it would have worked with anyone else.


How likely are you to recommend the ResidualHQ?

Every time. The people at Derry even say that if they have an issue with an Ixom mixer, the customer support that they receive on the phone is unlike any other company. You always take the time to fix the problem.