If there is one thing we’ve learned from the Jordan Lake project, there are great people working on behalf of the State of North Carolina from NC DEQ to the Army Corp Of Engineers to the State Legislative Assembly and everywhere in-between.  Among all these dedicated players including Medora Corporation, the "say all end all" was to bring cost effective real world solutions to the table for the betterment of Jordan Lake.

If there was a second thing we learned, it’s that the NC Media has no problem getting the facts wrong in favor of agenda driven drama & politics.

There was nothing but an honest demonstration of the absolutely proven & positive benefits of circulation on lake ecology; however, we’re not posting this to re-hash the ins and outs.  You can easily get our Jordan Lake Project Summary right here explaining our side of things. 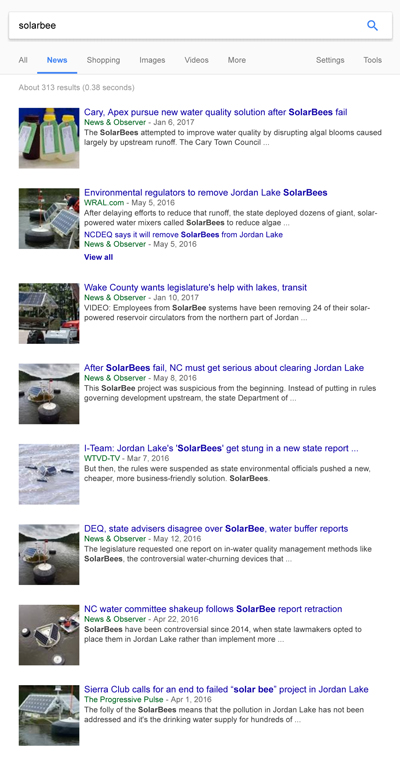 We are posting this to call out the News & Observer, NC Policy Watch, The Progressive Pulse, and the Independent Weekly (among others) for their blatant political slant and intentionally inaccurate reporting regarding the Jordan Lake Demonstration project.  Instead of even trying to understand the issues, they continue to drag the great SolarBee name through the mud for nothing other than political agenda.  Enough is enough.

Search “solarbee” on Google then click on the News.  As of this blog post, you find nothing but pages of unwarranted vitriol and political bent…for pages….and pages.  And all of them including some sort of "political jab" or just plain wrong & misleading information about the Jordan Lake Demonstration Project and SolarBees.

And it doesn't stop there.

Even with the Jordan Lake Demonstration Project in the books, if a NC Media article includes the words "Jordan Lake", you can rest assured "SolarBee" and a negative qualifier will be added in there somewhere. It’s quite obsessive for them.

Or does that seem like an honest Company being undeservedly used as a political pawn in an extreme game of idealogical chess.

SolarBee® Lake Circulators continue to be a proven and trusted method for solving blue-green algae control issues and water quality problems in over 400 lakes and other freshwater bodies across the Unites States, Canada, and the world.  SolarBees make water better...
End of story.

A good project with good players...

To the people working on behalf of the State of North Carolina… Thank you!  It truly was a great experience working with you all and we look forward to future collaboration.

And then some not so good players...

To the News & Observer, NC Policy Watch, The Progressive Pulse, and the Independent Weekly… You do yourself a disservice.   Get the facts right or else let it go already.