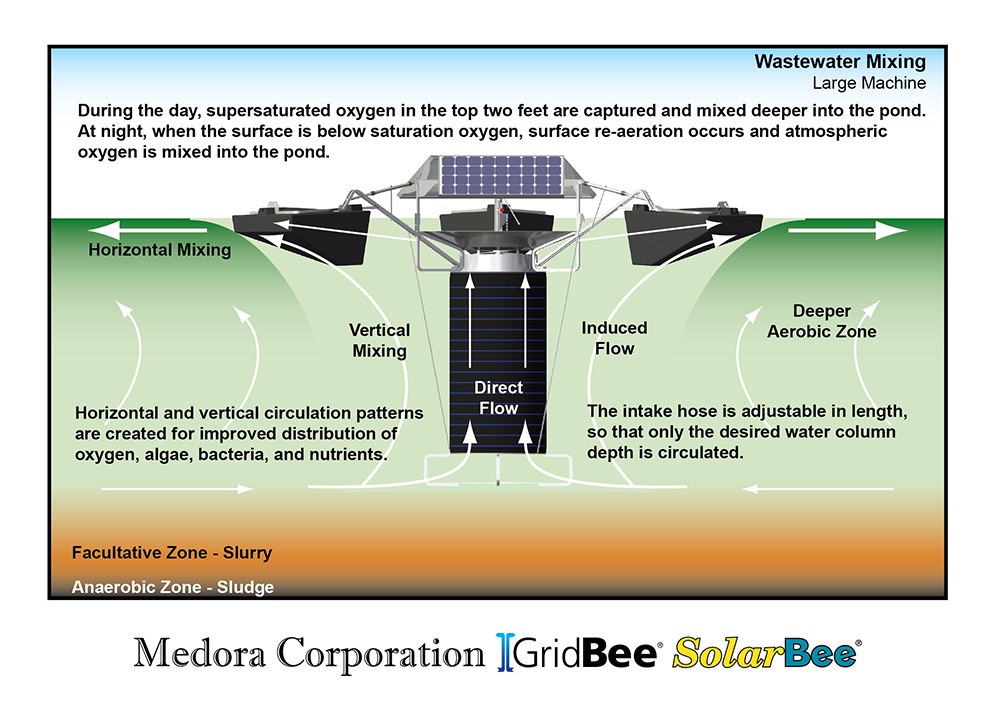 In most lagoons, sunlight causes a hard stratification at 12 to 18 inches of depth.  The top water is warmer and thick algae populations are producing supersaturated dissolved oxygen (DO).  The DO gasses off at the surface and is not readily available deeper in the pond for use by BOD-reducing bacteria.

Major system upgrades can often be avoided by making cost-effective enhancements to the system already in place. 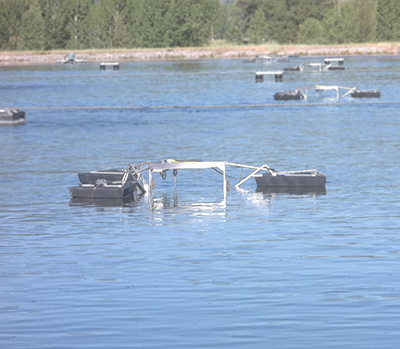 RESULTS: SolarBee® & GridBee® mixers are installed to circulate the top 50% of the lagoon.  These mixers can capture up to 400 lbs of DO per acre per day which would have otherwise been lost to the atmosphere.  The more DO mixed deeper into the pond, the more DO available for BOD-reducing bacteria to use.

Influent short-circuiting is minimized or stopped altogether (depending on system design).

A thick well-mixed oxygenated layer continuously destroys any hydrogen sulfide (H2S) odors bubbling up from the bottom turning them to sulfate and resulting in durable odor elimination.

At night or in cloudy weather when there is a DO deficit at the surface, surface re-aeration from SolarBee® GridBee® mixing can also add up to 225 lbs. of oxygen (O2) per acre per day.

Continuous mixing also removes surface films from the pond caused by fats, oils, grease (FOG) and proteins from the BOD bacteria.  This allows methane gas to exit the pond much easier (as usually evidenced by up to 300 methane bubbles per square meter) across the entire lagoon.  The increased methane release speeds up anaerobic digestion of bio-solids at the bottom.  Better & more effective sludge reduction eliminates any need to ever dredge the ponds.

Ammonia reduction is improved as well by two mechanisms:

1) NH4 liquid ammonium brought up by SolarBee® GridBee® mixing is pushed into the high pH surface water where it turns to NH3 ammonia and gases off, plus

Phosphorus reduction is improved.  Higher average pH in the pond together with consistent mixing helps phosphorus connect with calcium hardness forming a solid called appatite.  Appatite is more dense and falls to the bottom of the pond.

Algae does not create new BOD problems either.  Algae's two main growth limiters in lagoons are light (on cloudy days and at night) and carbon.

Carbon is supplied by BOD-reducing bacteria.  Through respiration, these bacteria emit carbon dioxide (CO2), which quickly becomes carbonic acid (H2CO3).  Algae in the pond strips CO2 from the carbonic acid causing a drain down of the entire carbonate alkalinity buffering pool.  This ultimately leads to raised pH and a shortage of carbon.

As algae cells die or are eaten by daphnia that die, they fall to the bottom where they are mostly digested anaerobically through methane fermentation. Most of the carbon they contain leaves the pond as methane gas, a non-nutrient.

A smaller portion of the methane fermentation carbon re-enters the buffering pool as CO2 and is converted back to either carbonic acid or carbonates. This is usually referred to as “nutrient feedback” from the sludge.

Living algal cells (also considered BOD) are trapped in the top two feet and do not move forward into the next cell.   When the primary cell is working correctly, 90% of the BOD reduction occurs there.

INFLUENT:   Influent composition is usually very low in comparison to the primary cell (only 10% as high of BOD, and less phosphorus and ammonia).

RESULTS:  Just as in the primary cell, circulation and beneficial algae growth result in large BOD, N, & P reductions.  More & better reduction means less of them are passed to the final cell.

Effective ponds in series compound the beneficial effect.  When both the primary and secondary cell achieve a 70% reduction of these nutrients, the amount passed on to the next cell is 30% x 30% = only 9%.

INFLUENT:   The influent has very little BOD (almost none) with reduced phosphorus and ammonia.

RESULTS:  The only BOD present are algal cells; however, algal growth is carbon limited and there is not enough to cause permit problems for BOD and TSS.  Ponds with SolarBee® GridBee® mixing typically discharge less than 10 mg/l of BOD and TSS which is well under the standard 30 mg/l  BOD and 45 mg/l TSS limits most jurisdictions have.

Affordable and effective SolarBee® GridBee® mixing can add real treatment enhancement to your lagoon system.  Please feel free to contact us to discuss further how Medora Corporation can help you meet your treatment goals.